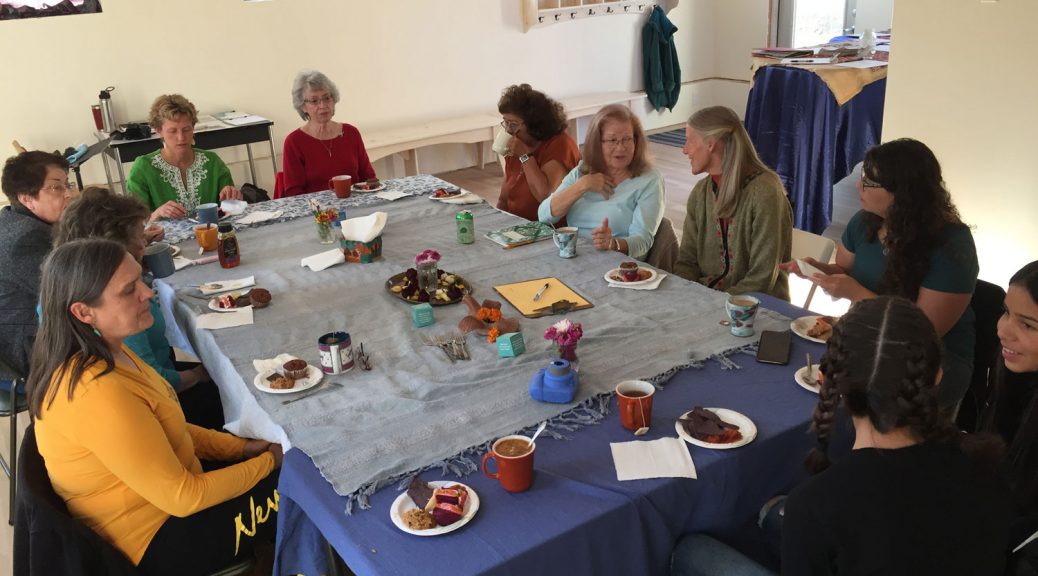 Event description: Questa Stories hosted a “Women’s Tea: a story sharing afternoon” on Saturday, Nov 16, 2019, at La Sala in Questa, NM. We collaborated with Esther Garcia* as our event co-host, an active community member and former Mayor of Questa. During her tenure as Mayor she had hosted a women’s gathering and was struck by the outpouring; women embraced the opportunity to come together in celebration. This event stayed with her and inspired her suggestion of a Women’s Tea. Together we selected a guest list that represented a variety of backgrounds and ages from within our community. A local graphic artist created an invitation with this prompt: “tell a story about a moment, experience, or person that changed or shaped your life.” We delivered these by hand and by email, and, in some cases, invited women by phone.

Thirteen women were present at the event, including two Questa Stories hosts (Gaea McGahee and Claire Coté) and two Youth Interns. We introduced the gathering as part of Questa Stories and the Manitos Community Memory Gathering Project and explained the digital archive. Recording their stories was optional, but encouraged, and most women wanted to be recorded. We asked all present to sign release forms allowing us to record their voices, take their photos, and for both to be uploaded to the digital archive and Questa Stories website (QuestaStories.org).

As organizers, our goals were to:

What we noticed: The stories shared at the event were heartfelt and personal. Some women were close friends, some were acquaintances, and some met for the first time. The afternoon gave us a shared experience with a sense of connection and levity by the end. One participant noted that since the event, when she sees women from the gathering in other contexts, she feels a closeness.

In this context, the goal of making “decent” quality audio recordings has to be balanced with the importance of making and maintaining an inviting and natural-feeling event, in which people are able to speak freely without thinking too much about the mic and the recorder in the room. We tried to maintain an informal feel at the event while not compromising the quality of the audio recordings. We used the built-in omni-directional mic of the M-audio recorder and moved the recorder around on a music stand to be closer to the storytellers/conversation whenever possible. The resulting audio recordings are not perfect, but we felt that allowing the natural flow of conversation to take place was more important than asking people to wait, start over, or restate their names. In an event like this the goals are multiple; we had to balance these goals in the moment and keep the methods to accomplish them in perspective.

Themes and things of note: People gravitate toward sharing stories or memories of their grandparents or parents; people warm up to storytelling, one story reminds someone else of their own, being in a small group puts people at ease, and so does tea or some element of hospitality.

Patterns we observed: romanticizing or idealizing the past, one person’s voice or an “us and them” narrative becoming dominant, stories reinforcing a social order, becoming unintentionally chastising of a group, and seeming to direct this critique toward those present. As hosts we wanted to gracefully handle these moments, but wondered, what is the role for facilitators when these patterns arise? Potentially, idealizing the past happens when the present seems too complicated or challenging to handle, or something is lost that can’t be recovered. A core idea behind a story sharing event like this is to empower people. It’s important to have strategies to help keep hearts, minds and conversations open. If the telling trends towards idealizing and romanticizing, then the opportunity for original stories to come forward is curtailed. Perhaps returning to the prompt or starting with a new question could help to reset the tone.

At the Tea, elements of StoryBox were available (question cubes were on the table, the instant camera was used). Judy Rutledge had previous experience with StoryBox (she volunteered at Questa Library Day, Questa Farmers Market and NeoRio) and referenced StoryBox in her short story, highlighting that even short stories can be powerful.

Youth Involvement: Two young women were part of the hosting team on the day of the event. (We refer to them as Youth Interns in this post.) They helped create the space, making small flower arrangements to decorate the tables, they helped to set up (and later, put away), tables and chairs, snacks and tea. At the close of the event, they took portraits with the instant camera, which were given to people to keep.

Reflections for the future: To improve this collaborative effort, hosts, volunteers and Youth Interns, will meet ahead of time so each person can offer input, define roles and responsibilities and share a plan. We plan to hold more gatherings in the coming year and to engage a variety of people from our community by working with different co-hosts. We are planning additional Women’s Teas, but we’re also interested in other social configurations; perhaps asking a couple to co-host an event for couples or both men and women. This is an evolving approach.

Outcomes and Archive Links: This gathering was an example of a Group Sharing Event, one of the four methods of memory gathering outlined in the Mellon grant.

Listen to Loveida’s story and discussion and stories that follow: http://nmdigitalheritage.org/admin/media/288

Most women were amenable to having their stories recorded and added to the archive. Eleven women’s voices (of the 13 in attendance) are represented in the audio recordings uploaded to the NMDigitalHeritage.org archive in the collection (item set) for this event: http://nmdigitalheritage.org/s/manitos/item-set/250

Organizer notes: Make appealing invitations! People appreciate these. But keep in mind, delivery takes time and is not perfect. How we handled the invitations: emailed in some cases, and hand-delivered, preceded or followed by a phone call. It seemed that this personal touch made a difference. Each of the hostesses reached out to and delivered invitations to their friends and connections on the guest list. On the invitations, we forgot to ask people to RSVP; next time we will include that detail.

While StoryBox was not used as a complete kit at this event, we used some of its elements, such as the instant camera and story prompt cubes, which sat on the table as inspiration. People took a look at them and we referenced them as we talked about having access to StoryBox as part of our memory gathering equipment.

IThe instant camera was something novel and empowering in the moment and became a tool in the hands of the young women who attended and helped host. The instant photo portraits taken were given to attendees as a memento from the event. We are reflecting on how to integrate this, and the instant photos generated, into future events, such as scanning the images before sending them home with people.

*Esther Garcia passed away on January 5, 2020, a month and a half after co-hosting this Women’s Tea. A powerful love for the people and history of this place seems, to us, to be a core conviction in her life. Esther celebrated and studied her roots, family and community history. She was a fierce advocate for land and water, acequia systems, culture and traditions. Her work and words have left a lasting mark on our hearts. Esther will be missed by many and we are grateful to have known and worked with her.