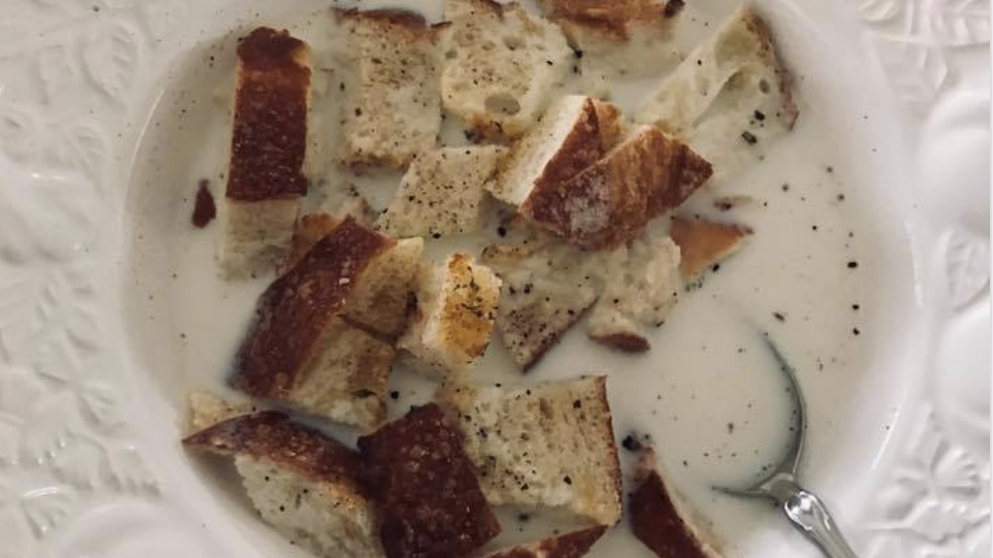 Recently, Kathy Rael Veenhuizen, a member of the Families of Costilla and Amalia Facebook Group, posted the following photo and question, to interesting results.

Food writing and foodie culture, at its best, enthusiastically celebrates traditional food cultures, like ours here in Northern New Mexico. However, the quest for recipes often results in a concentration on a few iconic dishes that are repeated and often modified to suit popular tastes, as they travel far from their origins. While this aspect of foodie culture is an admirable thing in its own right, after all, who doesn’t like finding a delicious new variation on an old favorite? What can often be lost, is the thread of intimate heritage knowledge that ties us all to our culture.

While eating bread and milk together, is something practiced all over the world, in a brief exchange of 12 comments, we learn a surprising amount about milk and toast as it is done in Costilla, New Mexico.

For Kathy, eating milk and toast is something she does to remember her father, Rudy, for whom, as she reveals in the comments, this was a much loved dish. Frank Arellano answers Kathy’s question, his family called it Sopa de Pan. Later, Natalie Herrera adds that her family called it Sopa de Leche y Pan and that it was often prepared, sweetened with sugar, for sick children and people with upset stomachs, but could also be a quick light meal.

Some people remember tortillas taking the place of toast and some remember their families using heavy cream instead of milk, which sounds almost decadent, perhaps especially to Gloria Horne, who remembers eating this with reconstituted powdered milk due to a lack of refrigeration out beyond the power grid. Yvonne Courtial remembers her grandmother adding vanilla and cinnamon. Bernadette Weldon says her brother still makes this with crackers, sometimes.

My favorite revelation, and the one that has my wanting to make milk and toast right now, is that many folks seasoned their sopitas (yet another name variation), with salt and pepper. Like Natalie, I always thought of this as something sweet with sugar, but savory sounds like it would really hit the spot.

Sopa de Pan is much too intimate and direct to capture the attention of the foodie world, or if it did, it would certainly be turned into something different and barely recognizable, in the way that frijoles the way your grandparents make them, is so very different than the fancified versions found on cooking websites and restaurant menus, filling the void created in the absence of tradition with the novelty of innovation. My grandmother did not give me a recipe for red chile, she simply showed me how to make it, saying that she could not write down the recipe because she had no idea what the measurements might be (does this sound familiar?) For how can set measurements and cooking times replace the deeper transmission of watching the gestures of a well practiced hand, the careful attention of the moment and the shared sensoria of smell, touch, sight and taste? Especially for something as simply sublime as milk and toast.

In remembering together, we can find strength in the commonalities that bind and celebrate the vigor of the differences. Thank you Kathy, by taking us back to your childhood kitchen, you help us remember ours.

Does your family make a version of Sopa de Pan not mentioned here?

Was there something you remember about ingredients, that might only be found in your community?

What do you remember about the times and places you and your family ate sopitas?

What other memories or traditions does milk and toast bring to mind?

2 thoughts on “Food Heritage: Diving Deep into Milk and Toast”