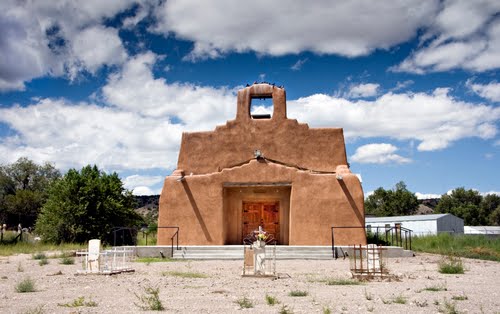 One of the most famous and most sought after photographs in American fine-art photography is called “Moonrise, Hernandez, NM” shot by Ansel Adams in 1941. I first encountered this photograph as capital “A” art in my university art history course. I was taught to appreciate this photo from an objective perspective, to memorize all manners of facts about its medium and technique. It is silver gelatin print that stands the testament of time for many reasons, but particularly in terms of technique. The photograph remains one of American photography’s most studied images because of how Adams reprinted the captured image over the years, adjusting the clouds in the sky by burning and dodging during development. It was not until the 1970s, when he printed the sky as an almost cloudless dark-toned expanse, that he felt he had achieved an effect equal to his original visualization of the scene.

I remember throwing up my hand in that class and proudly proclaiming, “Hey! A lot of my family is buried there!” The reply? “Interesting, Ms. Trujillo, but not pertinent to this conversation.”

Where I really grew to appreciate this cemetery as art was from the yearly cleanings that first, my gramita Marina, my great-grandmother, then my gramma Lola, and then my mom would drag me, my siblings, and all my primos on each year for Memorial Day. The famous moonrise happens to be located over the camposanto in the village where my mother’s family is from. By the time this photo was taken in 1941, generations of my family were already becoming the dust that became the land that bore the people who bore me. This is the San Jose de Rio Chama camposanto; people are no longer buried there, but there are families, like my own, who still go out each year to do the annual limpia, the cleaning for the ancestors.

You’ll notice that I used the word “drag” earlier, as in kicking and screaming, in regards to how my gramita, grandma, and mom got us to go clean each May. It was a ritual that we prepared for weeks in advance when late April brought the displays of plastic flowers to bloom in the aisles of TG&Y and J.W. Owens. This is where gramita could easily spent her entire chequecito, the small monthly government check she received, buying artificial gardens for all the relatives she could remember. Each year I would observe her making mental maps to catalogue everyone who needed remembering – as she taught us, people only die when no one tells their story any longer.

First, she would close her eyes and trace the mental image of the camposanto speaking the names of her loved ones: Antonio Francisco Montoya, Maria Bernadita Martinez, Jose Antonio Martinez, Fred Valdez, Conrad Valdez, Baby Freddie, Tony Valdez and on and on. When she got stuck, she would start telling stories of growing up and which tío lived next to the other tía and who they married and where they’d come from. As she did her remembering she told us stories of marriages, unrequited loves, and tragic deaths caused by lightning strikes with keys in the pocket, being bucked by a horse, or just plain heart attacks. She told us the stories of women dying in childbirth, leaving entire broods behind, or of the small graves for babies who never made it to life marked with a simple circle of rocks or a wooden cross. Once her stories were done, she completed the mental tally for flowers and either my Grandma or Mom were sent to the store to complete the purchases.

After the flowers were bought, hoes and shovels and rakes were collected for all the family members. As the youngest cousin, I was always given the job to pick the weeds that were left behind with my bare hands, a.k.a., the detail work. We’d pack coolers with the makings for bologna sandwiches, Lay’s potato chips, a box of little Debbie snack cakes, and cokes. Always present was a red plastic jug with a retractable spigot filled with water and ice for the entire family to share. Once the car was packed with all the tools and necessities, we’d head off for a day with the ancestors.

I say that I grew to appreciate the limpias of the camposanto as art because it took me well into adulthood to understand the value of this practice and others like it. At the time, I can fairly say that we kids were reluctant – anyone who has spent an entire day doing hard labor under the hot New Mexico sun, sweating salty drops and seeing Fruit Loop colored sun spots, understands hard work is grueling even if it isfor your ancestors. But the elders taught us to work the cemetery by generation and shade availability. These days were literally spent climbing (and cleaning) our family tree, right down to the earth where our ancestors were laid.

After the weeding, we’d go through each grave, sweep the concrete (or the dirt!), and we’d move the rocks that encircled many of the graves, rinse them in a bucket of warm soapy water that grandma brought, and replace them just has they had been the year before and the year before that. It might seem futile to wash rocks, but it always struck me as an endearing gesture, one more chance to wipe the smooth face of a rock in lieu of a loved one’s. Every grave marking, whether official military headstone or weather beaten wood cross, was checked for maintenance. If we’d forgotten a hammer, mom used a rock to pound nails back into the wood. Or, we could be sent around to find usable wire to reassemble the accessories of the afterlife. Our labor and the stories we heard weaved intricate mandalas around our ancestors, through grave markers and weeds, and figured us seamlessly into the design.

The catalogue of the Akron Art Museum describes Adams’ photo as “a timeless metaphor of the stillness of the American landscape and the magical character of its light.” For me and as I connect to the photograph by virtue of my culture and identity, there is nothing still about it. Though beautiful, the photo only hints at the art of the scene. Of the howling laughter at the stories about my grandpa Fred coming back from WWII to start a hamburger stand in El Guache, only to find reluctant customers in a community of people who had never eaten a hamburger before. Of the lamentations for loved ones lost before their time, like my Tío Tony and his friend who were struck on their bicycles by a drunk driver. They were only ten. Or the stories of all the beautiful and clever women who kept our homes together.

A vivid memory from my childhood is wandering and running through this orchard of family trees while the adults held vigil praying and visiting. To only see this photo as landscape removes the character of its people, and the culture of story. As Leslie Marmon Silko writes of her community, “The people perceived themselves in the world as part of an ancient continuous story composed of innumerable bundles of other stories” (Storyteller xix). Culture is made up of these stories, they tell our history, they speak our languages, they shape our everyday lives not only into the objects of art, but into art itself. Art is life. The everyday rituals of our communities form the lenses through which we will see the world, and that brings breath to art. On the occasion of the 75thanniversary of the photo, I still want to that professor (who I am sure has long forgotten me) to understand that those layers of family stories are pertinent. I see a moonrise over Hernandez every night, and I also greet the sun each morning from this place. Some of these mornings, I head over to Socorro’s Restaurant for the “I lost my a** at the casino” breakfast special and wave at the San Jose de Rio Chama cemetery along the way. My favorite table is underneath a poster of Mr. Ansel’s photograph. Here I sit amongst the voices of the many regulars. In their speech I hear the cadence of my relatives, the stories where I am from, and our pertinence is affirmed again and again.

10 thoughts on “The Moon Rises Over Hernandez Again and Again”