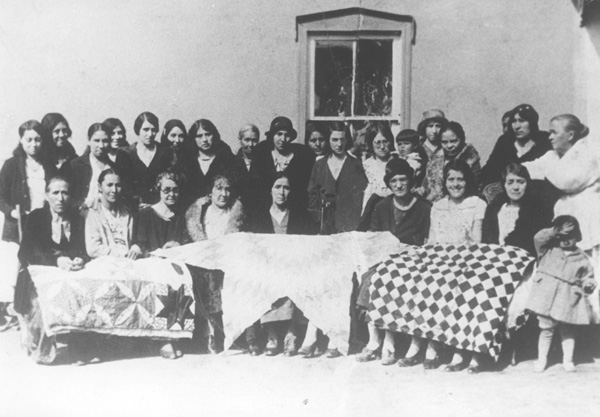 There is not a day that goes by that I don’t acknowledge the contributions of women, including in shaping who I am as a man to this day. Indeed, When I think of the power of the human spirit, realized especially through the deepest love that one person can hold for another, I think of mamá, my grandmother, one of the two women who raised me up in beauty and vision. Yet, as we close this month, where we pause to consider and commemorate women’s contributions globally, I think of all of the remarkable manitas who have shaped our histories, our landscape, our memories and our consciousness.

Historically, in New Mexico, I think of the writers and social movers and shakers—Fabiola Cabeza de Vaca, Cleofas Jaramillo, Nina Otero-Warren; of the activists—the Women of Salt of the Earth, Dolores Huerta; of the dreamers—the colonial and contemporary migrant pobladoras reaching for different ground, raising the crops and their children; of the creators, working in the elements, with wood, iron, clay, cloth, wool and imagination.  I also think of those women whose lives have been obscured by their servitude and circumstance and yet who also profoundly contributed to who we are as a community.

In reflecting about these contributions, my mind gravitated to the photograph, shared at the top of this post, an image that captures the creativity that emerges in the collective.

I first discovered this photo of women quilters of Questa when I had returned home and was living in my grandmother’s house, which had recently been renovated and in those renovations had been discovered. It included my grandmother, but also many other women of the villages from the 1940s and I knew that it had value for many others in my community. It was for this reason, that my impulse was immediately to share it. It was the photo of these women that launched the effort to create an exhibition that was entitled, MANOS, an acronym — Memorias Ardiendo y Nuestros Orgullo Sobreviviendo— defining the spirit of this exhibition— a cultural and storied pride, enduring still within the delicacy and strength of community memory.

My impulse is to want not just to commemorate women’s contributions simply during one month. Perhaps it is a good reminder, however, about why this effort was developed in the first place, to address the gap and the reality that women’s history has been marginalized. As we continue to develop our living memory project, the manitas of our landscape, historically, culturally and in our contemporary lives, remains a critical imperative.

One thought on “Women and Creativity”