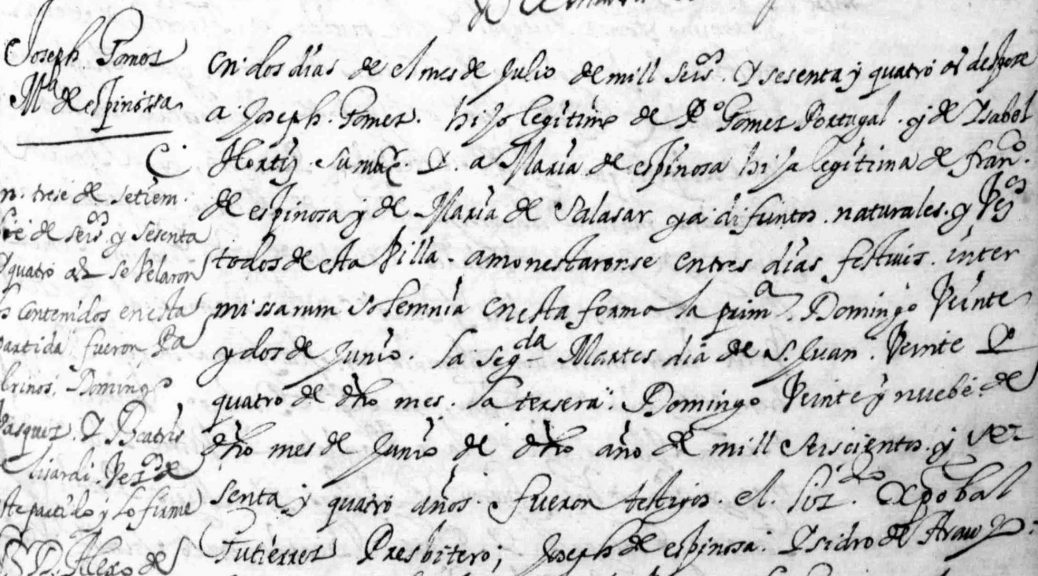 New Mexicans with Colonial ancestry can be traced to the early settlers who traveled from the “old world”, as well as those of Native American and Mestizo roots. Origins of New Mexico Families by fray Angelico Chávez as well as In El Camino Real De Tierra Adentro – Five Waves of Settlersby J.A. Esquibel, C. Preston, and D. Preston outline these settlers and settlement timelines. Three of the five main waves of settlements during the Colonial period, the Juan de Oñate settlement in 1598, the re-settlement by don Diego de Vargas in 1693, and the Juan Páez Hurtado Expedition in 1695 all show a presence of the Espinosa surname. There weren’t any Espinosas found in the wave which covered the era between 1600 and 1680, or the Velasco Farfán wave of 1694.

Among those who journeyed with Juan de Oñate was Macelo de Espinosa. Although his name is mentioned in various references related to the first settlement, there are no records that confirm any descendants remained in New Mexico.

It was not until the resettlement by don Diego de Vargas that the Espinosa surname actively appears in New Mexico. Pedro de Espinosa, a notary and corporal appears in New Mexico shortly after the reconquest. Pedro was born about 1668 and is listed as a native of Guanajuato and married to Melchora Hernández. They had one daughter, María, who was baptized 19 August, 1703 at Bernalillo. Aside from his daughter’s baptism there is no documented evidence which proves or suggests that he remained in New Mexico or left any other children.

My research indicates Nicolás de Espinosa to be the progenitor of the Espinosa surname in New Mexico. Nicolás was listed in the 1695 muster roll of the Juan Páez Hurtado Expedition as a Coyote and native of Los Lagos, twenty-two years with straight black hair and pockmarked. There is a note in the don Diego de Vargas journals of a Nicolás de Espinosa who traveled with the reconquest as a soldier in 1693, and presumably this is the same Nicolás who came with Juan Páez Hurtado in 1695. The record of Nicolás reports that he along with several others abandoned their duties prior to the entrance into Santa Fe and fled back to Mexico. In the 1719/1720 deligencia matrimonial record for his son Salvador Manuel de Espinosa and Petrona (Petra) Fernandez Martín, Nicolás is listed as deceased.

The Y-DNA results of the Nicolás de Espinosa lineage establish a clear Native American paternal haplogroup. His marriage record to Josefa de la Cruz indicates that his parents were José Gómez and María de Espinosa. Based on detailed research, too much to go into here, I have concluded that Nicolás’s father was a full blood Native American boy adopted into the Gómez family and that his mother María de Espinosa was a Mestiza. Below is an example of an image that portrays the casta identification during Nicolás’s era. As Assistant New Mexico State Historian Robert D. Martínez explains, “The caste system of New Spain in the eighteenth century was a system of documenting, cataloguing, and managing the diverse peoples and the different levels of Spanish Colonial society throughout Spain’s vast world empire.”

My research of the Espinosa families entitled The Hunt for Nicolás is a genetic genealogical study. The focus is on Y-DNA results of male Espinosa descendants who trace their direct paternal branch, father to father to father, to Nicolás (see image below). The project has been an ongoing effort since 2002, when I started helping three of my Espinoza friends trace their family lineages. As my research progressed, I began to realize that these lineages were significantly limited by missing records, including those that were traceable to the 1730-1750s. Since that time, several key records have been uncovered showing confirmed links to Nicolás on some branches. In 2006, I began to leverage Y-DNA data to help surmount many of the Espinosa family tree roadblocks caused by missing records.

Below are some of the known male family branches of the 18th-century Espinosa clan. Most are proven to link to the 1695 colonists Nicolás de Espinosa and Josefa de la Cruz, either by genealogical proof or Y-DNA confirmation.

Other important heads of household of the 18thCentury and likely sons of Salvador:

Below are some images of male Espinosas from a large collection I have obtained during my research and communication with many families.

The sources, details, and genetic results of the above will be found in an upcoming publication in the New Mexico Genealogist. The above is merely a synopsis of what the project has uncovered about the Espinosa family tree branches of the 18thcentury. The study has a lot more detail on the branches tested, expanded genealogies for each branch, as well as many other branches studied that have roadblocks at various time periods in New Mexico.

The early Espinosas have left a legacy among the contemporary Nueveomexicano people as well as the Manitos that have traveled far and wide. Some of these families are still living on the same Chimayó soil that their antepasados settled in the early 1700s, some participated in the migration to California from Abiquiú in the 1830s and 1840s and still have descendants living in California. Some were the 1stsettlers of Colorado, settling from Conejos to San Luis, others were early settlers of Abiquiú, Chama, Arroyo Hondo, Mora, Cimarron, and Socorro.

I have communicated with descendants of the above living in places such as Seattle, California, Washington D.C., Georgia, Colorado, Wyoming, Utah, and Arizona, to name a few. The family members have become college professors, military soldiers, military pilots, artists, scientists, engineers, agriculturists, filmmakers, historians, poets and authors, among many other noble and honorable professions. The Espinosa family history, legacy and stories are incredible examples of the Manitomigration and expansion. So many others have similar histories and stories to be told.

Permission for the use of pictures were obtained from the donators. All images and info are © of Miguel A. Tórrez and not for reprint without permission of the author.

3 thoughts on “The Hunt for Nicolás”