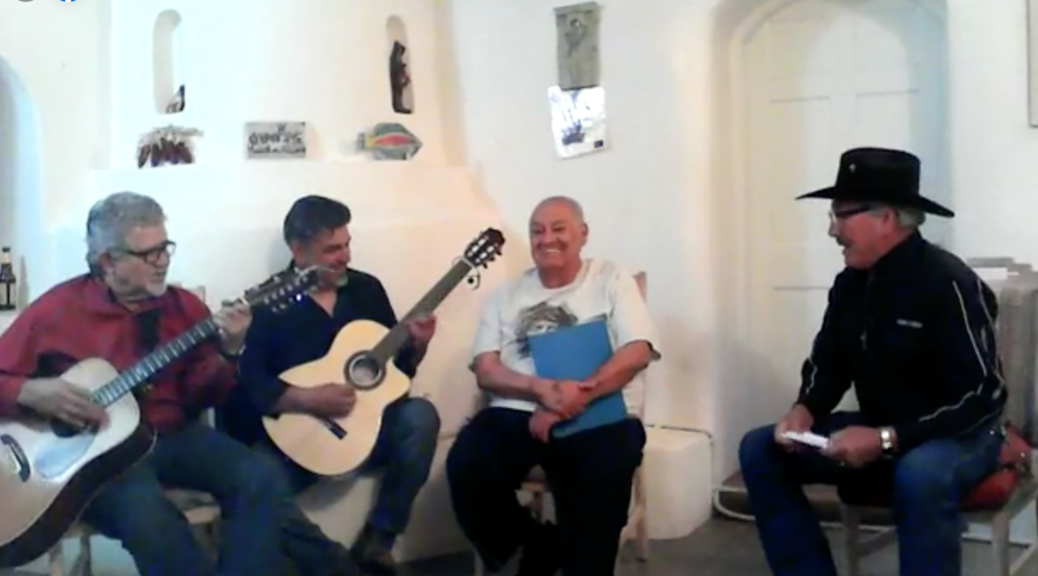 In the fall of 2020, Questa Creative Council board members invited Costilla native son and accomplished musician, Chris Arellano to create and lead a project exploring musical traditions in Northern NM and Southern CO. The project was spurred on by community members’ desire for more cultural sharing, honoring, celebrating, preserving and perpetuating of beloved local religious and secular music traditions. The project began with this question: How has musical expression in its many forms shaped the culture and people of this region? Through this provocation, Chris Arellano initiated the “Northern NM Music: Past and Present Project” through the Questa Creative Council in collaboration with Questa Stories and Manitos Community Memory Project.

Chris Arellano was a natural fit to lead this project, with both deep community and musical ties. He has been singing, songwriting, performing, and collaborating with musicians his entire life—originally gaining experience from his family-of-origin band, and pursuing and developing his ability on guitar as his main instrument, fused with song and story in a style he calls Nuevo Americana. He was a regular performer at Grand Ol’ Opry, earning a contract with Sony and Dreamworks Records, and touring across the country, playing on premier stages. In 2001 he opened a music school in Oregon, where he had moved, as well as a summer music camp in Costilla, his New Mexico hometown. He continues to absorb and learn from his roots and travels.

The project conceived of by Chris explores historical roots, celebrates current expressions, and gives voice to elders whose knowledge may not yet have been recorded and shared for current and future generations. In the first phase of the project, which took place in Spring of 2021, Chris Arellano interviewed four elders, focusing on themes of Los Penitentes Brotherhood (Ernie Marquez and Joseph Marquez), Los Dias New Year Celebration (Bernie Torres), and local music traditions of Northern New Mexico, 1960-current (Ernie Marquez and Michael Rael).

A key aspect of the project is interviewing members of Los Penitentes Brotherhood about the music of this tradition. “Some of these melodies have been passed down for over a thousand years. There is a deep spiritual journey through the lyrics. The ancient hymns are sung a capella. I [am interviewing] these men and recording what they are willing to share about the traditions of these prayers and melodies,” Chris says.

To conclude this phase, Chris wanted to share the project with communities and provide elders he interviewed with a covid-safe platform to share wisdom, stories, memories and music in a live public setting. Three of the four interviewees came together for an interactive, virtual concert via Facebook Live, on May 21, 7 – 8:30 p.m., broadcast from the T & R Historic Rio Plaza, in Costilla, NM. It was a wonderful and well-attended event, as well as a popular video with well over 1,500 views and counting.

The interviews were posted on the Questa Stories website and links shared during the concert. These interviews and this concert will also be added to the NM Digital Heritage Archive.

The interview with Joseph Marquez is an exploration of his history with Los Penitentes, los alabados and other musical traditions.
Listen here: https://questastories.org/2021/05/21/joseph-marquez/

The interview with Ernie Marquez explores his history with Los Hermanos and his experience as a contemporary musician in New Mexico and beyond. Listen here: https://questastories.org/2021/05/21/ernesto-marquez/

The interview with Bernie Torres discusses his involvement with the New Year tradition of Los Dias, as well as the communities and local traditions in and around Costilla and Amalia. Listen here: https://questastories.org/2021/05/21/bernie-torres/

The interview with Michael Rael covers his long history as a local and traveling musician. Listen here: https://questastories.org/2021/05/21/michael-rael/

This video, interviews and photographs will also become a part of the Manitos Community Memory projects digital heritage archive.

This phase of the project was funded and supported in part by New Mexico Arts, a division of the Department of Cultural Affairs, and by the National Endowment for the Arts, as well as the Taos Community Foundation.