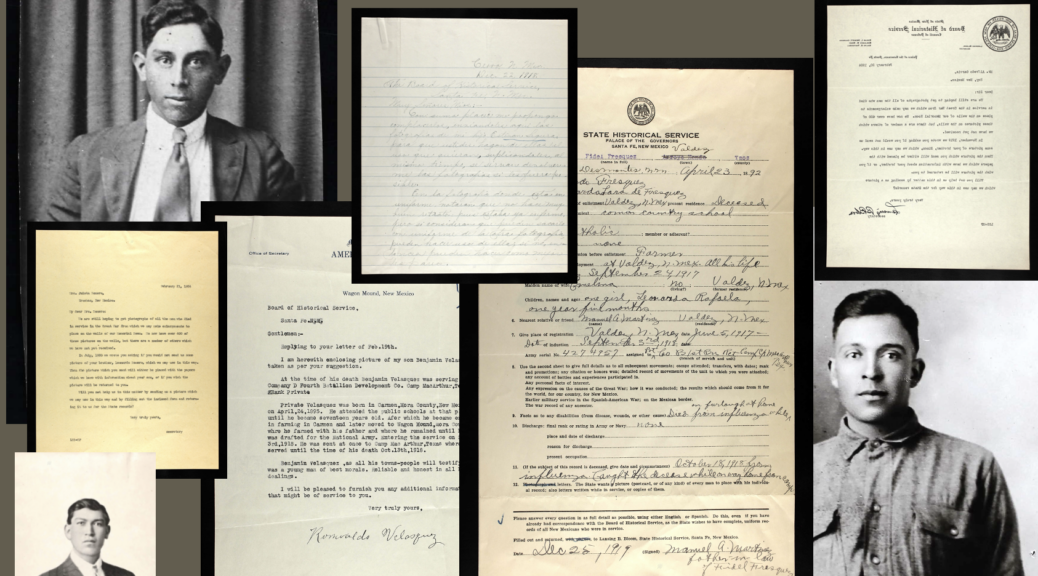 Over 80,000 New Mexicans registered for World War I, the war intended to end all wars.

In the end, about 9,000 were called to serve and more than 500 of those men died during the conflict, some casualties of combat and others succumbing to illness, including the so-called Spanish Flu. A great many of these men were from communities throughout northern New Mexico.

In the aftermath of World War I, the Board of Historical Services-State of New Mexico launched an initiative to memorialize those young men who died during WWI. Working out of an office at the Palace of the Governors in Santa Fe, the Board was chaired by Edgar Lee Hewett and included Lansing Bloom, Ralph E. Twitchell, and Benjamin M. Read. While the records reflect an involvement by Edgar Lee Hewett, the effort was largely led by Lansing Bloom who was charged with creating an archive from the 16,000 service and biographical records of New Mexico’s veterans.

While many records came from the federal government including sites where soldiers served, the most amazing part of the initiative was that it reflected a deeply engaging community process, often requiring the support of local government and organizations that helped make connections. But above all, the engagement was primarily with grieving families. Letters were sent by the Board of Historical Services explaining the goals of the project and requesting information about their sons and brothers.

Families responded to the call to memorialize their family members with their own correspondence. As a counter to the stereotype, the letters revealed the literacy and eloquence of men and women throughout the villages.

Writing in 1919 from Wagon Mound, New Mexico, Romualdo Velasquez replied to the request made by the Board. The letter was typed and sent on the letterhead of Mora County, Chapter of the American Red Cross, referencing the company his son had served in, when and where he was born and a noting that “all his towns-people will testify,” that he was “a young man of the best morals. Reliable and honest in all his dealings.”

Photos of the fallen soldiers were also collected, with the goal of establishing a Memorial Room of photographs of those who died.

The effort also included a survey that was sent out to families to gather biographical sketches of the fallen soldiers, including the date and place of their birth, names of their parents, education, church affiliation, occupation, name of spouse, marriage date, nearest relative, and cause of death. The responses to these surveys were windows into individual lives, but also serve genealogically, providing data for family trees.

In the end, the initiative culminated in a collective repository, but one that holds the arc of individual lives.

Another example from this archive is that of Jose Estevan Segura of Cerro, New Mexico. Jose Estevan registered to serve in World War I on June 5th, 1918. He was 21 years old. On December 10, 1918, the “Board of Historical Service” sent a letter to Jose Estevan’s parents, informing them about the project. The board asked if the family has a photograph that can be sent and if the family can give an account of his life. While the survey may not have been completed, the letter that was sent by Estevan’s father is the most eloquent and poignant letter, revealing the strength of a father’s love of both son and nation.

Transcription of the letter follows

The Board of Historical Service, Santa Fe, N. Mex.

Translation of the letter

The Board of Historical Service, Santa Fe, N. Mex.

It is with great pleasure that I respond to your request, including in this correspondence the photographs of my son Estevan Segura so that you can utilize them in whatever way you want. I only request that you return the photographs to me if possible.

In the photograph where he is in uniform, you will notice that he does not photograph very well. At that point, he is already ill. If it is possible to include the photograph of him in uniform, from the other photo, feel free to make use of it. If not, you may do what you need to.

The story of his life is very brief since he was only beginning to live, and therefore there is not much to mention. He was born on March 8, 1897. He was always very interested in the well-being of his neighbors and friends. He was also nice and very kind to everyone. I never had any knowledge of his being mixed up in trouble or strife. On the contrary, I always saw him surrounded by friends. He had a very moral character.

Regarding his life in business, I can say that he was always very diligent and active. From there you can form an idea of his life to a biography.

As you complete the archiving project, would you please send me a copy of the documentation of his life? Also, please send a photo of him in uniform, if it can be taken from an included photograph, which was taken in civilian dress. I am able to pay any costs of making this photograph once that cost is determined and sent to me.

Hoping that my letter is satisfactory for you, which I submit with great respect for you.
Benito A. Segura

P.S. The woman who is included in the photograph is Jose Estevan’s mother. We both mourn this loss, and yet, at the same time we feel the satisfaction of having contributed in small part to the cause of democracy.

One thought on “Memorializing the Fallen Soldiers of WWI”