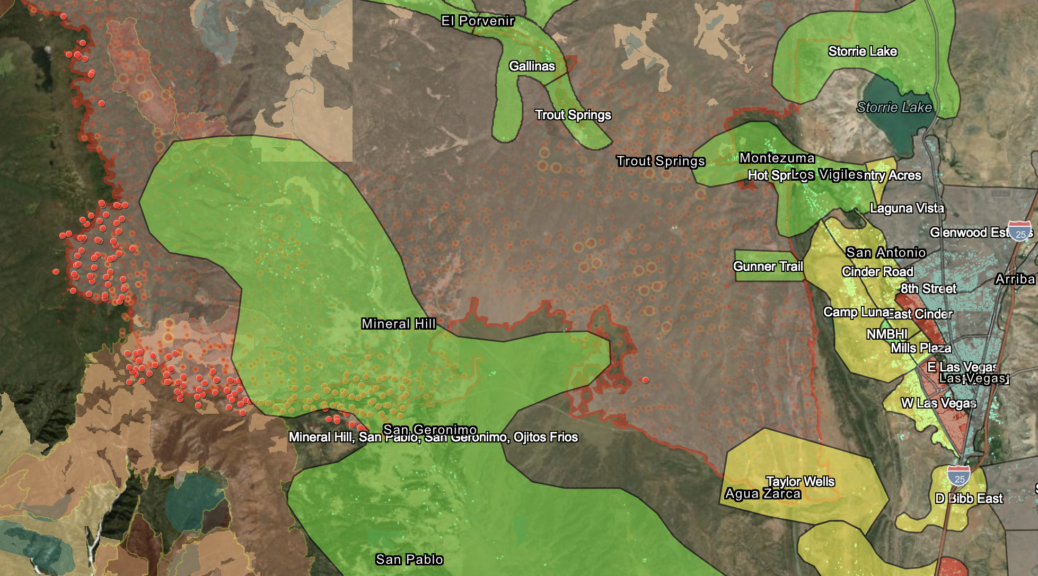 As I write this, the bulldozer/burn line that the firefighters have made from Highway 65 to State Highway 283 appears to be holding steady on the ARCGIS satellite map that I try not to obsessively check and re-check for hotspots and changes to a fire perimeter, that can move with alarming speed. This breathing space allows time for reflection that has not been possible for the last week, as the Hermits Peak Fire and Calf Fire merged and expanded in the mountains above Las Vegas, where I live. In Las Vegas, springtime is often ushered in by sustained windstorms that feel stronger and more destructive every year. I recall having the realization that that was our climate change disaster. New Orleans has hurricanes, Chicago, ice storms and Las Vegas, wind storms. One thing I didn’t take into account… in a drought, wind inevitably means fire. I imagined us having to build our communities in different ways… it was not lost on me that low thick-walled adobe houses were particularly well suited to the wind cyclones of the future. Our Manitos past once again pointing the way to our Manitos future.

An unintended consequence of checking a satellite map 20 times a day, is that you become intimately familiar with the landscape. I have a better understanding of the location of villages that i’ve only known by name, how to get to them, features of the landscape that surround them. I even know the layouts of their buildings. What I don’t see on the map are the people and the lives we all make here.

Yesterday, the livestreams video updates the fire team send out every day at 6pm told us that because of sustained winds, the fire would not “rest” during the night like normal. I woke up this morning anxious that I would find Mora, Cleveland, Holman, Mineral Hill and San Geronimo gone. As per the satellites that doesn’t appear to have happened, but the unprecedented windstorms are predicted to rage for another 3 days.

In addition to survival anxiety, the heart is sick for everything that is being lost in our Manito villages. The livelihoods of the people, the beauty of the land and the cultura our ancestors built here. The collective memory and the lived present it informs. There are so many aspects of the unique way our cultura is constructed that leave the gente vulnerable to the brutal dynamics of disaster capitalism and I fear for that much of what is important in the lives of the gente and of the villages, could slip through the cracks of The Recovery that will follow. It is difficult to place dollar amounts on a land-based culture when the landscape itself is terraformed.

It is not enough to “rebuild” after the fire, but to rebuild in the right way, in a way that maintains and even strengthens our heritage cultura. This will not happen automatically. The Disaster Response infrastructure is not designed to take into account Herencia and Querenica. It is here that Manitos Project has a role to play.

In the whirlwind of thoughts and emotions of the last few weeks, I kept returning to something that Estevan used to say, the Manitos Project’s unofficial mission statement: “The Manitos Archive is a place for Manitos to see themselves.”

In the days weeks to come, we will be exploring ways in which the Manitos Project can quickly respond to that mission amidst this disaster, and in the process contribute to that “rebuilding in the right way.”