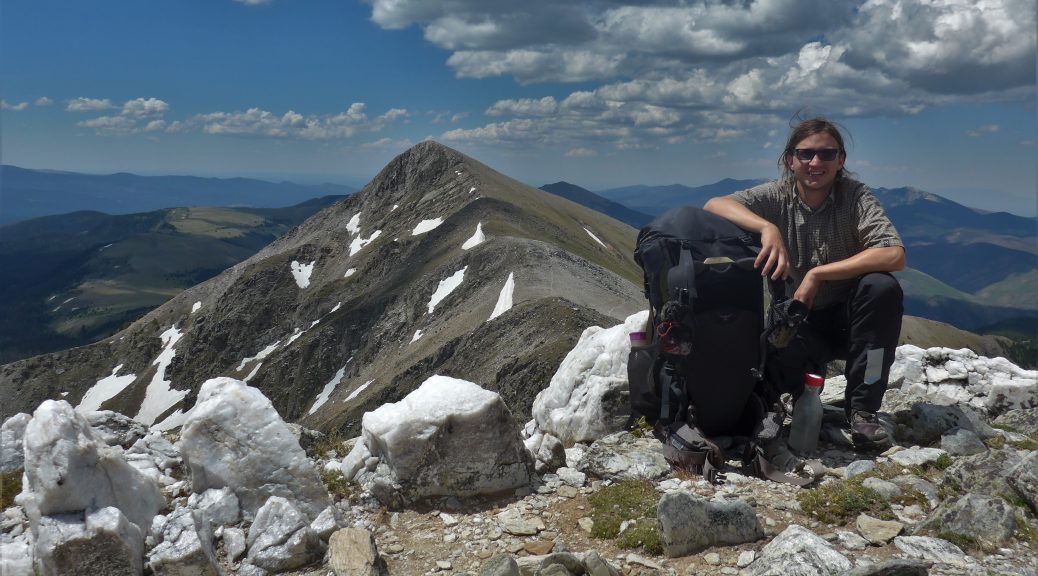 Place-names allow a people to create meaningful places in their environment. They tell us more than just the lay of the land: they reveal culture and record folk knowledge of local fauna, flora, soil composition, natural and human history. In Manito culture, where maps were historically rare, the names are the map. My name is Len Nils Beké. I am a linguist and a mountaineer.

This is me in June 2014, somewhere in the Manito homeland. This picture was taken on the northernmost summit of the Sierra de las Truchas, called el Picacho del Norte. Behind me is the glacial valley of el Río Quemado de Este Lado, which is joined by el Río Quemado de Aquel Lado which runs behind the grey ridge on the left. The village visible just right of center is Truchas, still called Las Truchas by some older residents. To the left, out of view behind the wooded ridge is Córdova, historically known as el Pueblo Quemado. Somewhere on this picture there may be a place called el Llano de los Quemadeños, though I do not know its exact location.

All these names are used by the Manitos of Truchas. What do they tell us? The name Sierra de las Truchas connects the ridge with the village and alludes to its sawtooth profile, sierra being the Spanish word for a saw blade. The spatial references de Este Lado and de Aquel Lado take perspective from the village of Truchas. Someone from Cundiyó might differentiate the branches of el Río Quemado differently.

San Antonio de Padua del Pueblo Quemado, soon shortened to Pueblo Quemado, was settled from Santa Cruz de la Cañada between 1725 and 1743. The fact that it was named Pueblo Quemado from the start suggests that it was never the village itself that burned. It’s more likely that there was a large forest fire somewhere upstream prompting the river to be named Río Quemado and the name was then ‘deposited’ on the northern bank when a village sprang up there. El Pueblo Quemado became known as Córdova after the creation in 1900 of a post office which may have been run by a member of the prominent Córdova family. Many Nuevomexicano villages had their names changed when they received their post office, in Córdova the new name stuck. The unmapped place known as el Llano de los Quemadeños was once part of the Merced del Pueblo Quemado.

These are the names of Manito oral tradition and they reveal a rich cultural landscape, but much of that landscape is obscured in official maps of the area produced by the US Geological Survey and the Forest Service. The Sierra de las Truchas become the Truchas Peaks, the locally meaningful Río Quemado de Este Lado y de Aquel Lado are abstracted to become North Fork and South Fork Rio Quemado, the historical name Pueblo Quemado is absent and el Llano de los Quemadeños does not exist if the map is to be believed. The Merced del Pueblo Quemado was never recognized by the US government.

Cultural erasure by means of the manipulation of place-names is a feature of mapping everywhere in the Manito homeland. In a sample of 16 1/24,000 USFS maps depicting the greater Pecos area, I found only about 20% of the names of natural features were accurate representations of oral tradition. I started the Manito Topos Project in Fall 2014 as a way of contesting this erasure. The poster below presents the methods and goals of the project.


The next step in the Manito Topos Project is a fieldwork expedition I have dubbed Seiscientas Millas Manitas (600 Manito Miles). Starting around May 12, I will be cycling from village to village on what an Abiqueño friend once called my bacicleta de meras patas. Along the way, I will be looking for and interviewing people knowledgeable about the place-names of oral tradition as well as giving presentations and trainings wherever the opportunity presents itself. I will ride north from Santa Fe to Fort Garland, CO, then cross the Sierra to La Veta and ride back to Santa Fe on the other side. This route can be seen at the following link.

The following are the villages and towns I plan to visit on my ride:

If you can think of anyone in or near these locations that I should talk to on my journey, please email me at lenbeke@unm.edu, call me at (505) 218-6108 or join the Manito Topos Project Facebook page. I will be documenting and journaling the trip on this website as well as on the Facebook page.

Featured Image: July 2017. Atop el Picacho del Medio on day 6 of a long walk between Santa Fe and Amalia. Directly behind me in the background is la Sierra de Santa Fe; el Picacho del Norte left of center; below it el Bordo Lajado, known in English as Trailrider’s Wall.

2 thoughts on “The Manito Topos Project”