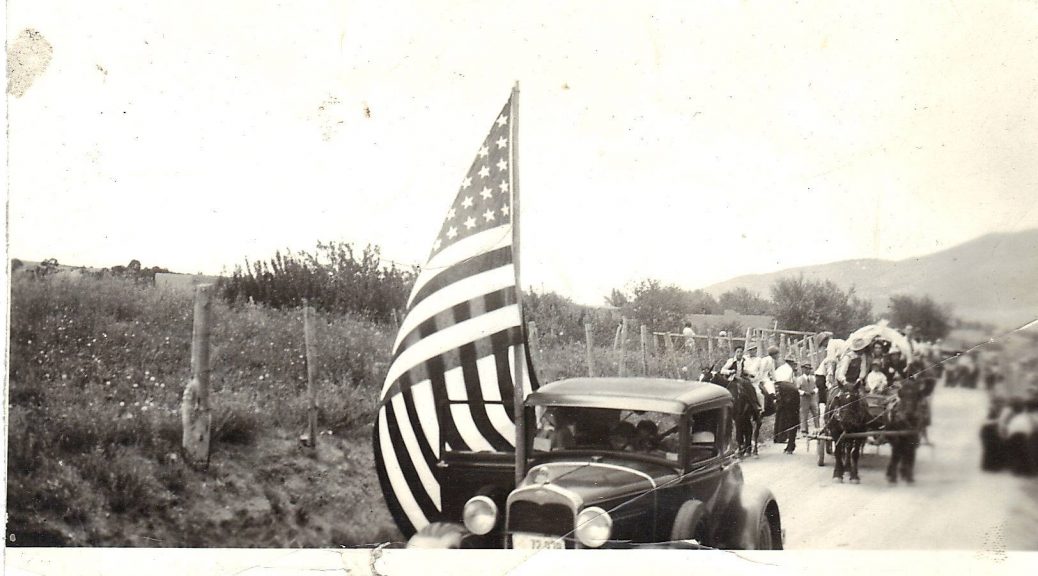 Recently, I came across a couple of photos taken of a Independence Day Parade in my home village of Questa, from circa 1935, which led me to reflect about this commemoration.

It is interesting to reflect on this celebration of Independence Day (4th of July) for a mountain village that had been settled by Mexican citizens after Mexican Independence and before the U.S.-Mexican War that resulted in the annexation of the northern portion of Mexico. Questa, which was actually founded and abandoned several times between 1815 and 1840, was originally named “San Antonio del Rió Colorado.” While the stories of población, or the peopling of this area is crucial, it is also important to recognize that población often comes hand in hand with despoblación, the dis-peopling of an area. Early on, this region did not only sit on the edges of indigenous pueblo communities but opened up into a fertile valley that was home to Mouache and Capote bands of Ute Indians and used as a hunting ground for other nomadic tribes, including Kiowas, Apaches, Comanches, Cheyenne and Navajos.

When these photos were taken, it was less than a century since the people of the Southwest had been incorporated into the United States and just over two decades that New Mexicans had been granted full citizenship when New Mexico had finally become a State. This followed a prolonged battle in Congress with efforts to resist the incorporation of New Mexicans as full citizens, all defined by a distinct racism and anti Catholicism.

While the contemporary event of the Fourth of July has been largely defined by fireworks, barbecues and family reunions, Independence Day is a federal holiday commemorating the adoption of the Declaration of Independence on July 4, 1776, when the Continental Congress declared their independence from the British Empire and made the thirteen original colonies into a new nation – the United States of America.

If someone had suggested to New Mexicans in 1776, that someday their descendants would be celebrating this event, they would have scoffed at the idea. At the time, the people were still being governed by a distance Spanish King. The governor of New Mexico was Tomás Vélez Cachupín whose policies would dramatically effect New Mexico, particularly relations with indigenous people and the settlement patterns. For instance, under his administration, a major effort was made to resettle Genizaro –indigenous slave — communities as buffer communities throughout New Mexico. While Genízaro families could be found in various communities throughout the colony by this point, by the end of the century four major defensive buffers were in existence, including in villages that would serve as points of origin for Questa based families, including Abiquiu and Taos.

It was the same year that Fray Francisco Atanasio Domínguez would visit New Mexico, charged with conducting a full inspection of the mission’s spiritual and economic conditions of the region, an effort that included the gathering of “geographical and ethnological data,” information which would serve, as he wrote, “both Majesties” and which would thus prove useful in both formulating frontier policy and promoting the spiritual welfare of this distant and little understood region externally. Of the Taos population, Domínguez wrote, “These settlers are people of all classes, but mostly mestizo and genízaro. Some are masters, others servants, and others are both, serving and commanding themselves. They speak the local Spanish, and most of them speak the language of the pueblo with ease, and to a considerable extent the Comanche, Ute, and Apache languages.”

This remarkable description reveals a great deal about identity and should allow us to think more critical of being and belonging to a nation. Aside from the evident mixtures prevalent in the region by the mid 18th century, how people communicated reveals an amazing multilingualism, necessary for everyday life that defined not only trade relations, but family relations as well. The fact that he notes that Taos was so deeply defined by indigenous mixture should also not be lost on us either. Interpreting this window into New Mexico in 1776 reveals that New Mexicans sense of belonging to nation was even then complicated, depending upon the origin and trajectory of their ancestors at the time, including those who were of indigenous backgrounds.

So, given these snapshots of New Mexico in 1776, particularly in terms of identity. Aside from the fact that by the mid 18th century, that mixture had defined who New Mexicans were, their allegiances to ‘nation,’ particularly for the everyday, common farmer and rancher, was not nearly as important as family and local community. Yet, who would have imagined then, that an American flag would lead a parade in a mountain village in New Mexico, where the sounds were not only distinctively Spanish, but the traditions a blend of all of the nations that had ever defined who these people were, indigenous, Mexican and European alike.

Particularly in a moment when being and belonging to the nation is fraught with the politics of hate and exclusion, it is important to assess critically these celebrations and symbols. New Mexicans, indigenous and Hispano alike would fight at the front lines of every American war. While more symbolic, bearing the American flag in the mountain village in these decades and those that would follow require understanding that in spite the show of national loyalty, Native American and Hispanic people would continue to face marginalization and vehement discrimination. History is complex, but pulling back the layers from the surface is imperative, particularly in this moment.

One thought on “Independence Day – Imagining the Nation, in Questa, New Mexico”