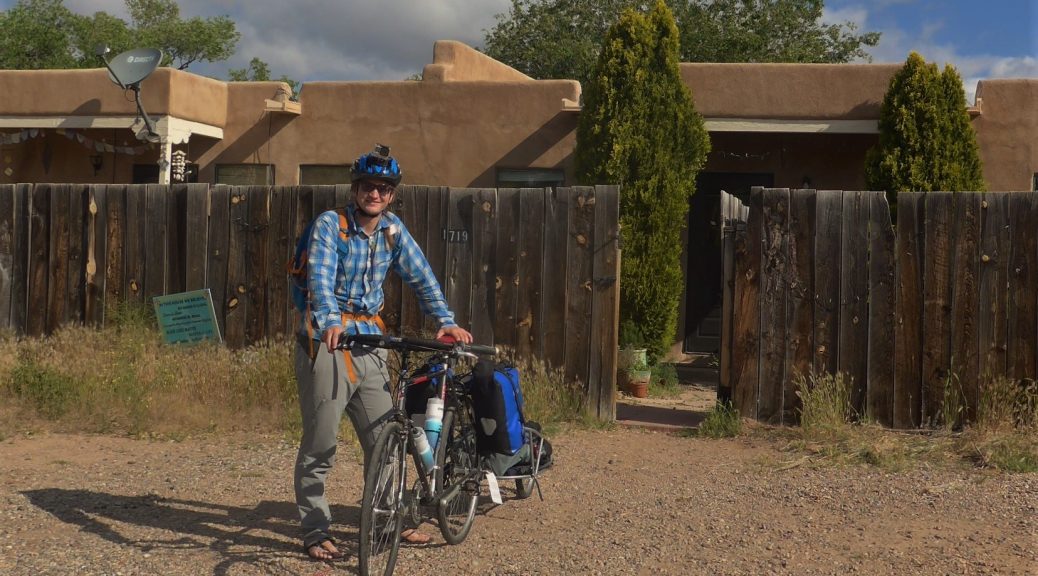 I will not be able to complete my circuit this summer, but work is going well. I’m currently in Fort Garland, CO, sitting at about 250 miles ridden (https://caltopo.com/m/APPK). I’ve been able to document place names from the Río Santa Barbara north to La Sierra, by San Luis. I will continue north to Los Crestones (Redwing, CO) and then ride back to Costilla to take the bus and train down to attend Feast in Cochití on July 14th. After that, I plan to follow up with some established contacts in Questa, Arroyo Seco, and Taos and start doing work in the Río Embudo watershed and along the High Road to Truchas.

This map (https://caltopo.com/m/JH1R) was made with the help of the members of the Rio Costilla Cattle and Livestock Association and is the most complete documentation I’ve been able to make so far this summer. Some major features in this land are La Sierra Pelada  (aka La Pelada, Las Peladas or The Baldies; officially Big Costilla Peak), Las Nueve Lagunas (Latir Lakes) and Cerro del Latir (Latir Peak). Some place names may be in use by only a few families, reflecting their use of the land, like the three campaderos on the northern end of La Pelada: Campadero del Rito en Casa (Encasa?), Campadero del Rito Alamoso and Campadero del Oso were sheepcamps used by the Arellano family of El Ventero.

Some pictures from the road:

After yet another delay, I was able to get on the road on June 14th. I decided to start from Taos and spent the past week doing interviews in el Llano Quemado, Ranchos de Taos, Los Córdovas and Arroyo Seco. Total interviews is up to 8, documented names close to 100.

Today I want to share two maps I’ve been working on as I’m on the road:

The first is a map of the words used to refer to the inhabitants of specific villages, towns and cities. The English technical term for this is “demonym”, but I much prefer the Spanish gentilicio – a name for the gente. Dixeños is interesting because it applies a Spanish suffix -eño to an English root Dixon. The map also includes some joke genitlicios like talpeños brujos for the people of Talpa and santafeo instead of santafesino for Santa Fe; these are marked with a purple N for Nickname.

The second map I want to share today is one of the nicknames of villages and towns. These names are limited to informal conversation but they are rich in folk poetics and show off Manito verbal artistry. For example, upstream from Dixon, Cañoncito is nicknamed Canyon City: phonologically parallel but semantically opposites. Sometimes these nicknames are used for villages whose names were changed for post office names, which can be seen as reclaiming community sovereignty over naming practice: Dique/El Dique for Dixon (historically San Antonio del Embudo), La Vela for Velarde (historically La Jolla), La Q for Questa (historically) San Antonio del Río Colorado.

After two weeks delay, I finally started riding north. You can follow my progress at https://caltopo.com/m/APPK. I would like to thank Andrés Sabogal & family, David Páez Acevedo, Felipe Ruibal & family and Estevan Rael-Gálvez for their generous support the past few weeks and for helping get this expedition off the ground. Gracias.

I did my first interview today in Cuyamungué and was able to document two names: La Mesita and Las Barrancas, both pictured below.

Rising only about 60 feet from its surroundings plateau, La Mesita is not a very tall feature but it is distinctive with large rocks strewn down its steep western slope. It’s located just east of Cuyamungué, across the highway on the Pojoaque Grant. The Spanish Cuyamungué derives from a Tewa place-name K’uuyemunge ‘Place of Fallen Rocks’ (k’uu ‘rock’ yemun ‘fallen’ ge ‘place’), which may have originally referred to this hill.

Las Barrancas are a sandstone cliff band rising to the north-east of Pojoaque and stretching out for almost 2 miles straight north from Jacona. It is erroneously mapped with masculine grammatical gender as Los Barrancos. I confirmed the feminine form with several consultants from Cuyamungué. Nuevomexicano Spanish has both the masculine barranco and the feminine barranca, meaning cliff, though it’s unclear whether there is a slight semantic distinction between the two variants or whether particular microdialects of Nuevomexicano Spanish simply have one or the other.