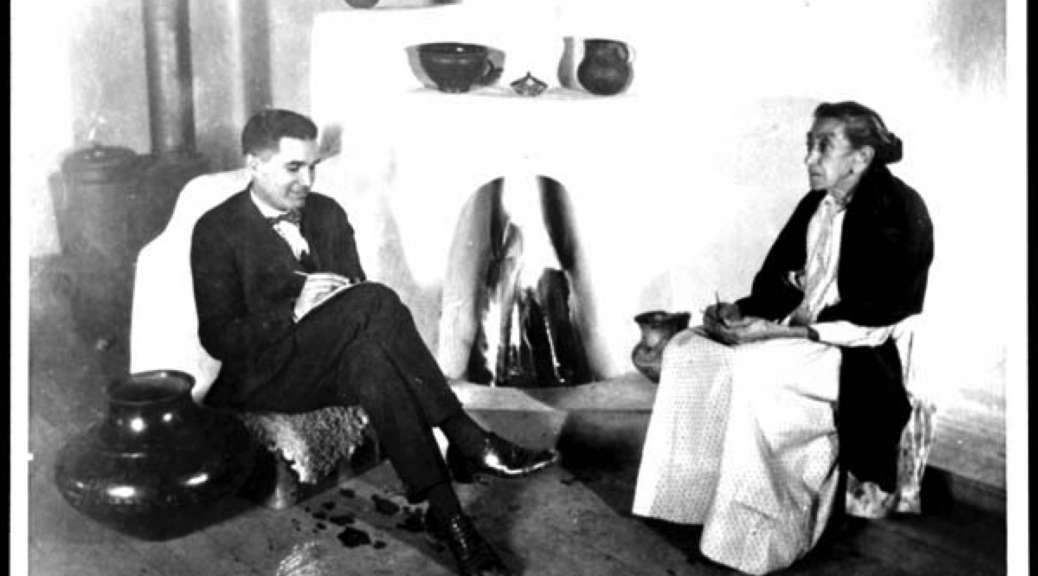 One of the core lessons I learned from my grandmother was that the best storytellers are those that have mastered the ability to lean in and to listen. In this, I think of the work of now renowned linguist and folklorist, Juan Bautista Rael. As a native son of the region, he had no doubt been raised on stories, however, in the summer of 1930, he returned home, freshly minted with a Master’s degree from the University of California, Berkeley.

That summer, while teaching at the University of Oregon, this young scholar visited villages throughout northern New Mexico and southern Colorado. During those visits, I imagine this 29 year-old with his pressed suit and tie, sitting at kitchen tables, walking alongside gardens and orchards and sitting in chairs set along the sunny side of the walls—every setting a resolana. I imagine him with pen in hand and leaning toward those who had taken the time to share stories. That year he gathered 410 stories. Ten years later, with a Ph.D. from Stanford University, he added another 108 tales to the collection.

Eventually published as, Cuentos Españoles de Colorado y Nuevo Mexico: Spanish Folk Tales of Colorado and New Mexico, this collection of stories comprises an important archive, reflective of a particular moment in time, both local and global. It places above all, the people that served as it’s cuentistas, the bearers of the stories contained therein.

As part of the Manitos Community Memory Project this Fall, New Mexico Highland’s University Department of Media Arts and Technology will teach a course where its students will begin to develop an exhibition that may result in a story map of this part of Rael’s legacy to the region.

Toward this end, we are hoping to engage communities and individuals connected to these storytellers. Rael visited ten villages in New Mexico and eleven in Colorado, all interconnected as a region.

According to the introduction to the published volumes, the “storytellers were mostly farmers, stock raisers, farm laborers, sheepherders, housewives and the inhabitants of small communities engaged in miscellaneous occupations.” Our goal is to try to understand even more context for who these individuals were. While the image of storytellers is often that of elders, it is interesting to note that nearly half of the individuals are under the age of 50, with a fair number in the 20s and 30s and with two listed as ages 16 and 17 respectively. Most of those over 50 are in their late 50s or 60s and the eldest interviewed was 80. There are also twice as many men storytellers as there are women.

As we approach this project, we have many questions and recognize that there is as much a poetics as there is a politics to these type of projects, that define who gets interviewed and who doesn’t. Some of this involves the subjectivity of Rael himself. He was fairly young when these interviews took place and although he was a native son with existing family and deep roots, he had also been gone for many years. As far as we can tell, Rael made concerted decisions about who was interviewed, but also what villages to focus on. There are, for instance a large number of stories that come from the southwestern part of Colorado’s San Luis Valley, particularly the villages of Antonito, Conejos, Manassa and Mogote, which may be as a result of the fact that Rael was married to Quirina Espinoza of Antonito, who would have connected him to many individuals.

One of the goals of this particular part of the Manitos project will be to develop biographies of these individuals, to understand their lives more fully and to find photographs or other documents that reveal more about who they were. We also would like to connect with their descendants and as part of the class, we may record these individuals reading the stories that were once shared by their ancestors. Those 97 storytellers that met with Dr. Rael between the 1930s and 1940s follow:

Even as biographical information, photos and documents are shared, they can be posted beside the names above.

If you have any information, photos or a connection to these storytellers and would like to contribute or participate in this project, please contact the Manitos Community Memory Project through the contact page of this blog or directly by email at nmstoryteller@gmail.com